I am sitting in the apartment listening to Catherine talk to a director about a movie. Some of the conversation I can keep up with (and even contribute to a little) but some of it is in another language.

Today has been delightful (again). We had a slow morning rise, and then went for a walk around the shady parts of Griffith Park. Shady as in there were trees giving us shade from the blazing sun (yay, we got summer today) and we didn’t go to the bare hillside where we would have baked. It was really beautiful. We saw a snake, and some turtles, and some little fishes.

Then we did a little shopping, I bought some new blue shoes, we got groceries. Then after lunch I worked in a café until it closed, and then moved to another café to keep working while Catherine worked at home.

It’s been restful, warm, and productive. And now it’s just about time to party.

The party was fun. We were at the Netflix building, which is walking distance from Catherine’s house. We were given popcorn and water and we watched episode 7 of Godless which was a western thing. Lots of shooting. Lots and lots and lots of shooting. And really amazing scenery, which a friend told me afterwards was totally wrong, ‘you don’t get a nice valley like that unless you go 100 miles up into the mountains.’

After the viewing, the composer came out and answered questions. He was hilarious. He kept saying things like, ‘oh yes, this guy, my orchestrator, he doesn’t suck’ and ‘the cellist, just forget it.’ Which were both really high compliments.

He also told us that you can sleep for 20 minutes, wake up for 10 minutes, and then work for four hours and you can do that for, I think he said five weeks, if you’re really under pressure and need to get work done. Not what I’m planning to do.

And then there was the party part where I met heaps of Catherine’s friends. I managed to drop the finger food on the floor but not get it all down my front, so I think that’s a win. Had fun chats about D and D, books and movies, music, all that stuff. And afterwards we found a bar called Know Where and had a bit more chatting before coming home and dropping into bed.

I am obviously writing this the morning after, but I couldn’t have written anything that made sense last night. It was so cool to be part of something like that and to see a window into the film world here.

I’m caffeinated now, and I’ve had a nice plain breakfast, and I’m almost ready to see what today holds. So far, it has held sunshine and a hummingbird. 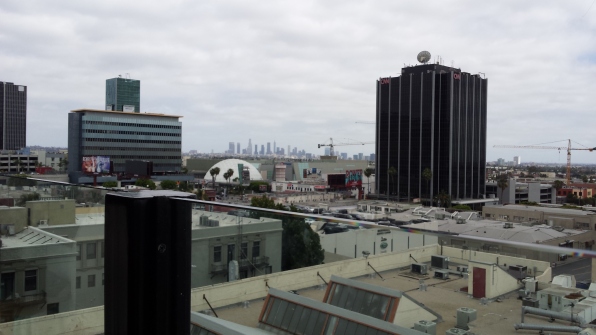 There has been a few God things this trip already. Call them coincidences if you like. I’ll allow that.

The first of these amazing happenings started its story a couple of years ago. Caleb just happened to have the same profile picture as a guy called Jake. Jake reached out and they became friends. Then Jake decided to attend university in Tasmania. Caleb picked him up from the airport and they’ve had some classes together. It’s been cool.

Well, Jake decided to go home early. And in an amazing coincidence we were booked on the same flight. That meant that we could take him to the airport in Tasmania and in even more of a coincidence, my destination in LA is on the way to his destination. So he (or the friend who picked him up) could easily drop me off.

That’s when the second God thing happened. I was buzzing my sister’s apartment (and the buzzer apparently doesn’t work) and the guys who dropped me off were double-parked outside and waiting for me to get in. And I had a backup plan here, just letting you know. But no plan at all was needed because one of Catherine’s neighbours took one look at me and let me into the complex. She didn’t speak a lot of English but she said, ‘Sister? Yes, sister. Same face.” Which was hilarious. So, on the basis of a very strong family resemblance I was up and knocking on my sister’s door in no time and giving her a huge hug.

So it’s been a very promising start.  The hug was followed up with three hours sleep, a nice walk around the neighbourhood, and a beautiful lunch together on a rooftop restaurant. I’ve taken some touristy photos and enjoyed the warmth.

I’m looking forward to what tomorrow will bring!

I write this from the air over Tasmania. I’m on a flight to Sydney, then from there to LA. I can hardly believe it myself.

It’s about 15 hours since I finished my last day of work at the university. My final PhD student handed in his thesis. I handed in my keys. I am actually done, and moving on to my new life.

Starting with, a brief interlude in LA.

I am going to visit my sister, meet as many of her friends as possible, see the places she hangs out, and then she’ll be coming back with me to Tassie so that she can visit all of us. We haven’t hung out together for three years. It’s going to be a really wonderful time.

The plan is to give you all a little blog update every day of my LA visit. I don’t know whether it’s going to work but I think it will be fun if it does. Notice the lack of commitment in that sentence. I’m not up to committing to a challenge right now. I’ve been awake since 3am. I’m not thinking clearly. But I’m hopeful.

The coast of Tasmania is disappearing below the wing of the aircraft. I’m in a window seat with a row of seats all to myself. I would love it if that happened for the long haul flight too but I reckon that will be too much to ask.

My poor little brain is going overtime trying to process the changes that are happening right now. I had a really big, ‘What on earth am I doing? Am I totally crazy?’ moment as I handed in my keys yesterday and left work for the final time. But when I got home I opened a bottle of bubbly and had a quiet moment of celebration with Moz. And this morning, I’m just trying to process the fact that I’m flying to America. Maybe I’ll catch up with myself in a few weeks. We shall see.

The sun has just popped over the horizon. I’m about to be served a coffee. I’m going to keep this short and sign off, and maybe give you a few more thoughts from the other plane before I put this online.

Now I’m in the air over the ocean. You know, it’s really amazing that we can fly in these metaltubes. I was reminded of this as we drove in the bus from the domestic to the international terminal in Sydney. In front of me was a little boy, about two years old I reckon. He was so excited.

He’d give a big gasp and say ‘plane!’ and then another gasp and then ‘plane!’ and as we got to the international terminal and the planes were bigger and closer he couldn’t even get the word out. It was just gasp after gasp. I was hoping he wouldn’t hyperventilate. It was the cutest, and absolutely hilarious. (Though one of my friends who works in baggage handling is pretty much the same when it comes to planes I think. He loves his job. Which is wonderful.)

I love to fly. It’s fun. I like the food, the choice of movies, the little hot towelettes you get to refresh yourself, the blankets and the pillows.

I don’t like not being able to lie down to sleep, the fact that I’m sitting right in front of the toilets, and the constant noise. But you know, soon I’m going to be so tired that none of that will matter. I hope.

Catch you on the other side of the Pacific Ocean.